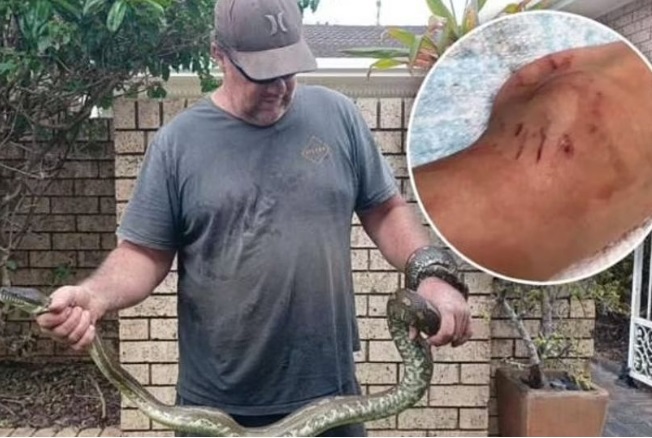 A boy of 5 has been rescued as he was about to be swallowed by a hungry 10ft python.

The shocking incident happened in Australia.

Beau Blake, 5, was enjoying a swim at home in Byron Bay, New South Wales on Thursday, Nov. 24, when the python struck.

He was bitten, constricted and dragged into a swimming pool by the monster snake, which was about three times the boy's size.

Pythons squeeze their prey to death in a couple of minutes before swallowing victims whole.

Luckily Beau was freed after a dramatic rescue effort by his 76-year-old grandfather Allan, who pulled the boy from the pool before dad Ben prised the snake off his son's leg.

"Beau was just walking around the edge of the pool... and I believe the python was sort of sitting there waiting for a victim to come along... and Beau was it," Ben told Melbourne radio station 3AW.

"I saw a big black shadow come out of the bush and before they hit the bottom, it was completely wrapped around his leg...

"Once we cleaned up the blood and told him that he wasn't going to die because it wasn't a poisonous snake... he was pretty good actually."

He added that his son was an "absolute trooper" and in good spirits, but that the dramatic saga was still quite "an ordeal".

Ben said his father Allan had jumped into the pool "with no self-preservation whatsoever". "I'm not a little lad... [so] I had him released within 15-20 seconds," he added.

Ben held on to the python for about 10 minutes as he desperately tried to calm his children and his father, before releasing the reptile back into the vegetation.

He said pythons were a fact of life in the area, saying "look...it is Australia".

Thank God for his life

Thank God for the boy life