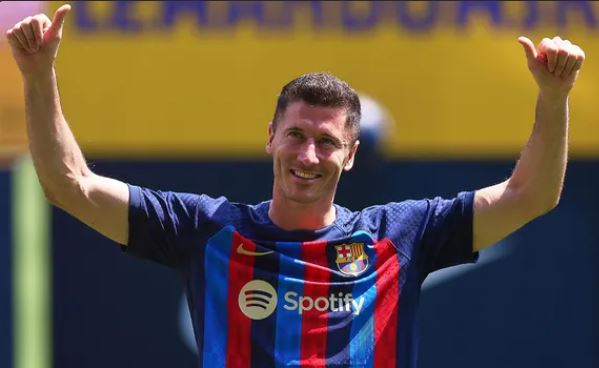 World famous Polish professional footballer, Robert Lewandowski has been presented as Barcelona's new No.9 player. He was presented before Barcelona fans following his €50 million (£42m/$51m) transfer from Bayern Munich.

The Poland international has inherited the iconic jersey from Memphis Depay, who is being strongly linked with a move away from Camp Nou.

Lewandowski turns 34 later this month, but dismissed any suggestion that his best years are behind him at his first press conference at Barca's stadium on Thursday, having failed to score in his first three appearances for the club in pre-season.

"I think my age is not important right now, it's just a number. I feel better than when I was 29," he said.

Barca managed to sign Lewandowski despite the ongoing financial issues which have overshadowed the team's performances on the pitch over the past year.

The club has taken dramatic steps to cut costs, including asking a number of players to accept wage cuts, but Lewandowski believes in their long-term vision under current president Joan Laporta.

"I know that Barcelona was not going through an easy time, but when I spoke with Joan and heard about the project and the way they wanted to follow, I thought that the best thing was to make the jump to Barcelona," he said.

Lewandowski added on a potential battle with Real Madrid's Karim Benzema to be top scorer in La Liga: "I'm not thinking about Real Madrid or Benzema, he's an extraordinary striker, but for me the most important thing is to win with Barcelona, not to beat him."

We expect much from lewandoski this season