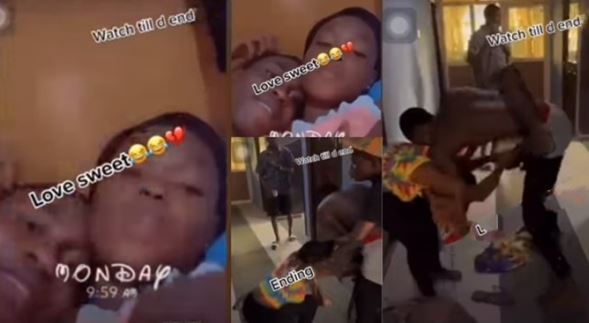 Social media users are reacting to a video of a young couple who shared a perfect video of their relationship whereas, it is the opposite.

The man and his woman had shared a lovey-dovey video of themselves in the morning to portray a rosy partnership but the reality was far from that.

In the clip, they could be seen all cuddled up on the bed and kissing each other, however, hours later, they got into a serious quarrel.

They fought so intensely outside their apartment that neighbours had to intervene and tried to break up the bout.

Someone believed to be a neighbour or friend that had seen their PDA video, filmed the fight to show what happens behind the scenes of some relationships.

Meet The Man Born Without A Jaw, Who Found Love With His Gorgeous Wife (Photos) Read More

Nigerian Man Mourns His Fiancée, Who Died One Month To Their Wedding (Photos) Read More