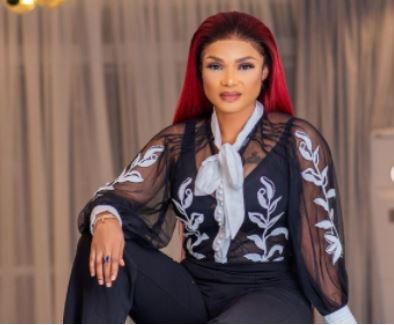 Nollywood actress, Iyabo Ojo, has finally revealed what her ex-husband Ademidun Ojo does for a living. This is as it had been claimed in the past that he's a movie marketer.

The information on Wikipedia appeared also described Iyabo’s ex-husband as a “movie marketer”.

“Iyabo Ojo got married to her estranged husband and Lagos-based movie marketer in 1999 at the age of 21”, it wrote.

“She has constantly stated she might drop the name of Ojo as her surname. Although the marriage didn’t last, it was blessed with two children.”

Sharing a screenshot of Ademidun’s description in an Instagram post, the 44-year-old actress disclosed that her ex-husband “was never a movie marketer”.

According to her, Ademidun was a “clearing and forwarding agent”.

“Please who handles this Wikipedia? Bloggers, my ex-husband, the father of my children, Mr Ademidun Ojo, was never a movie marketer,” she wrote.

“He was a CLEARING and FORWARDING AGENT at Tincan Island.”

The film star got married to Ademidun in 1999. She gave birth to Felix, her son, and Priscilla, her daughter, in 1999 and 2001 respectively.

The actress had earlier disclosed that she is in a relationship. She, however, said she won’t reveal the identity of her lover on social media till they tie the knot.

Is this really real

Wow is this really true

NOT EVERYTHING SHOULD BE POSTED ONLINE