Woman Accuses Police, Owner Of Amen Estate, Of Covering For Land Agent Who Allegedly Broke Her Leg Over N30m Deal 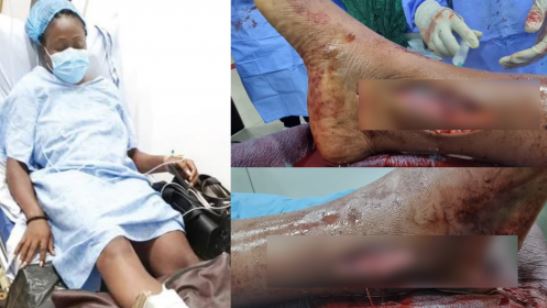 Citizen Adeyinka Igbinoba, a Lagos State resident, has called on the Inspector-General of Police, Attorney General of the state and National Human Rights Commission to ensure that a land agent, Saheed Mosadoluwa and the owner of Amen Estate, Sade Gbadadamosi, are made to pay for the injustice done to her.

Gbadamosi is the chairman and CEO of Redbrick Homes International Limited, promoters and developers of Amen Estate, a posh neighbourhood in Lagos.

Mrs. Igbinoba is currently reeling in pain from a broken leg allegedly sustained during attacks from Mosadoluwa and his thugs for daring to ask him to refund N30 million collected from her siblings and about a parcel of land which was later found to be fraudulent.

Narrating the incident to SaharaReporters, she said that life has become brutish, hard and unforgiving as the hope for a new life has been dashed by alleged moves by police authorities in Lagos and operatives of the Economic and Financial Crimes Commission (EFCC) to sweep the matter under the carpet.

According to her, Gbadamosi has denied her right to enter her property at Amen Estate Phase 2, which she said was legitimately acquired from her; and that her life has been constantly threatened by Mosadoluwa.

Mrs. Igbinoba, who is now confined to walking with crutches, narrated, “Mid 2021, two of my siblings were swindled by an alleged criminal named Saheed Mosadoluwa, aka Ibile of the sum of N30,000,000 in a bid to buy a parcel of land which was later found out to be fraudulent. When he was confronted, he promised to refund the money but he never did.

“After several months, my sisters took the matter to the EFCC and it was to no avail. They were forced to involve our parents. Our parents called this man and pleaded with him on several occasions to please refund this money. During one of the calls, he agreed that they should meet and he gave the meeting point and time which was to be by 4 pm on November 20, 2021, at his office.

“On this day, my mother had called me to accompany them to the meeting venue, which was Landbook properties, Eleganza Complex, opposite VGC.

“Unknown to us, it was an ambush, Saheed Mosadoluwa had placed his thugs around the venue. Innocently we went to his office and my mum started by pleading with him that N30m is not a small amount and that he should please refund the money.

“One of my sisters also pleaded with him. All Ibile could say was that not even the EFCC chairman could take the money from him, that he was a very powerful man and not being proud, hence he prostrated for my mum. He went on to say before he would even listen to us, we should go to EFCC and withdraw the case and then come back to meet him.

“At that point, my sister’s husband said, if that’s what he wants he should issue us a bank draft so we can have a guarantee as to why we will withdraw the matter at EFCC. All efforts to get Saheed Mosadoluwa to reason with us were to no avail. At that point, I said, “you said you are not a proud person and you are saying not even the EFCC chairman can take the money from you, and I beg to differ on your statement on not being proud.”

Mrs. Igbinoba noted that it was at that point that he flared up and summoned his thugs who came in and pounced on her brother-in-law.

“On seeing this, I brought out my phone to start recording, being a journalist and media practitioner myself.

“But Saheed Mosadoluwa saw me and came after me. He wrestled and struggled with me to take my phone but I resisted. At this point, I was making my way out of his office to an open place where people could see us.

“When he saw that he couldn’t take my phone, he went back to his receptionist desk and took wood carving as a weapon and came after me. He aimed at hitting my head, I was fortunate to see him on time so I had to dodge it. While dodging it, I lost my stability and staggered, but then he caught up with me and kicked me with his leg and I fell to the ground. He struck again with the weapon but now hit my ankle and my bones shattered instantly.

“This was a pain I couldn’t describe; he still didn’t relent. So, I knew I had to run for my dear life. At this point, the thugs were still inside dealing with my brother-in-law being the only male amongst us. When I stood up from the ground to run, that was when I realised how grievous this injury was. I had no choice but to start hopping on one leg,” she stated.

Continuing, she said, “By the time I got to the staircase, I was about to be attacked again by two of his thugs whom he had again signalled despite him still following me closely from behind, but miraculously my driver appeared. The thugs were shocked and not knowing who my driver was and momentarily dispersed. At this point, my driver knew he had to whisk me away from there. He carried me on his back and off we left the scene.