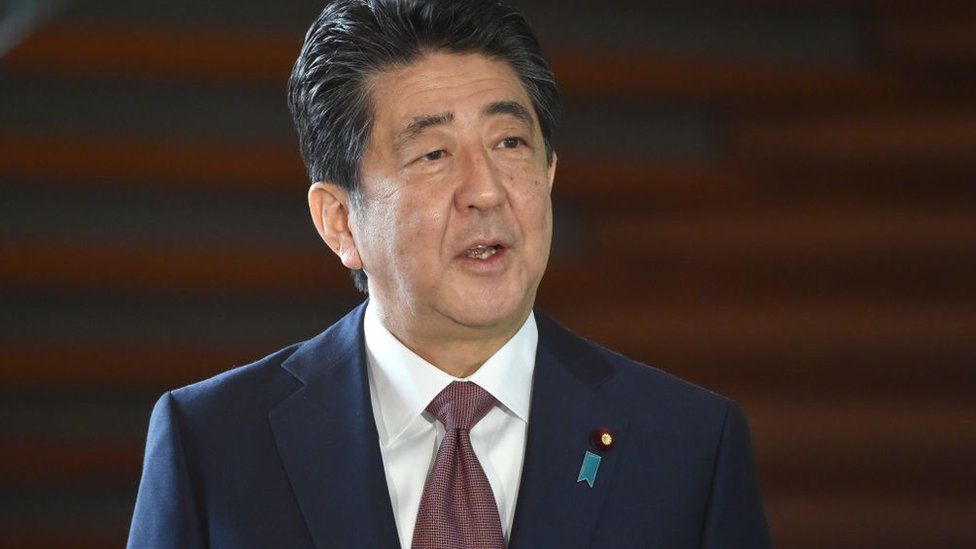 How could Japan ever contemplate getting nukes? It's a ridiculous idea. Japan is the only country in the world to have suffered a nuclear attack. Twice. Japan acquiring nuclear weapons is unthinkable. The people would never accept it. Right?

Or so the story has gone for the last 77 years.

But in the last few weeks one Japanese politician has started suggesting otherwise. He is Shinzo Abe, Japan's longest serving post-war prime minister. Mr Abe has begun saying loudly and publicly that Japan should, indeed, think seriously and urgently about nuclear weapons.

What we are talking about here is a fundamental break with Japan's post-war commitment to pacifism - something enshrined in its post-war constitution.

But it's no coincidence this call-to-arms has come just as Russia has invaded Ukraine.

For those, like Mr Abe, who have long yearned for a fully re-armed Japan, the invasion of Ukraine serves as a useful example of what can happen to countries that don't defend themselves properly against bigger, better armed and more aggressive neighbours.

Richard McGregor of the Lowy Institute in Sydney and author of Asia's Reckoning believes Abe thinks the time is right to push genuine debate in Japan and get on to the serious work of really trying to persuade the Japanese public.

"I think that's the holy grail here. I think he wants to try and move public opinion, which has been frankly pretty stubborn," he told the BBC.

Pretty stubborn is an understatement. A survey conducted last year found 75% of Japanese want the country to sign the Treaty on the Prohibition of Nuclear Weapons.

Mr Abe's call for a nuclear debate was met with outrage from atom bomb survivors' groups in Hiroshima and Nagasaki. Current Prime Minister Fumio Kishida (who is from Hiroshima) was quick to slap down his predecessor, calling Mr Abe's suggestion "unacceptable".

But Mr Abe is an astute politician. He knows Ukraine has come as a huge shock, and he knows the Japanese public is worried about an unpredictable nuclear-armed North Korea and an increasingly aggressive China. 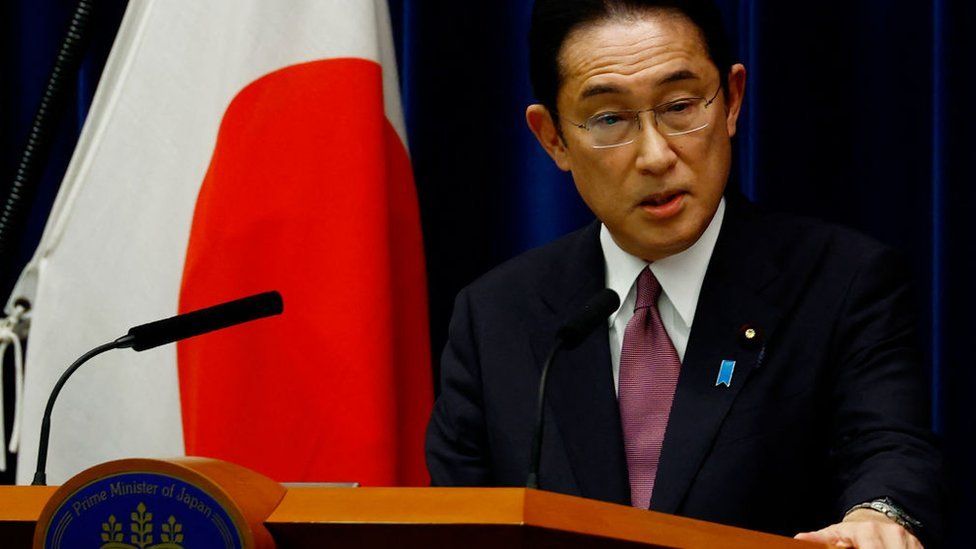 Professor Yoichi Shimada is a conservative academic and long-time friend and advisor to Shinzo Abe.

"He thinks it's imperative for Japan to have some kind of independent attacking power against China or North Korea," Professor Shimada says.

"And that includes possibly a nuclear arsenal. But he also knows it would be suicidal for any politician to advocate for Japan to have nuclear weapons, so he wants to activate the debate.

"The official position of the Japanese government now is to rely on US extended (nuclear) deterrents. But Japan doesn't allow the United States to deploy nuclear weapons in Japan. That, frankly, is selfish."

And so, Mr Abe is not suggesting Japan build its own nuclear weapons. He's suggesting it borrow some from America.

Largely forgotten in the post-cold war world is the fact is that Germany, Belgium, Italy and the Netherlands all store US nuclear weapons on their soil.

More than that, if there were a nuclear war, these non-nuclear weapons states could "deliver" those weapons to targets on behalf of the US, using their own aircraft.

This is what Mr Abe is now proposing for Japan.

It all still feels very far-fetched. Japanese law has explicitly banned any nuclear weapons from its soil since 1971. But Mr Abe is not alone in calling for that ban to now be debated.

Ryozo Kato was Japan's longest serving post-war ambassador to the United States and is perhaps the most ardent advocate of the Japan-US alliance. But he says with a nuclear-armed North Korea, Japan can no longer just to rely on the US nuclear umbrella. 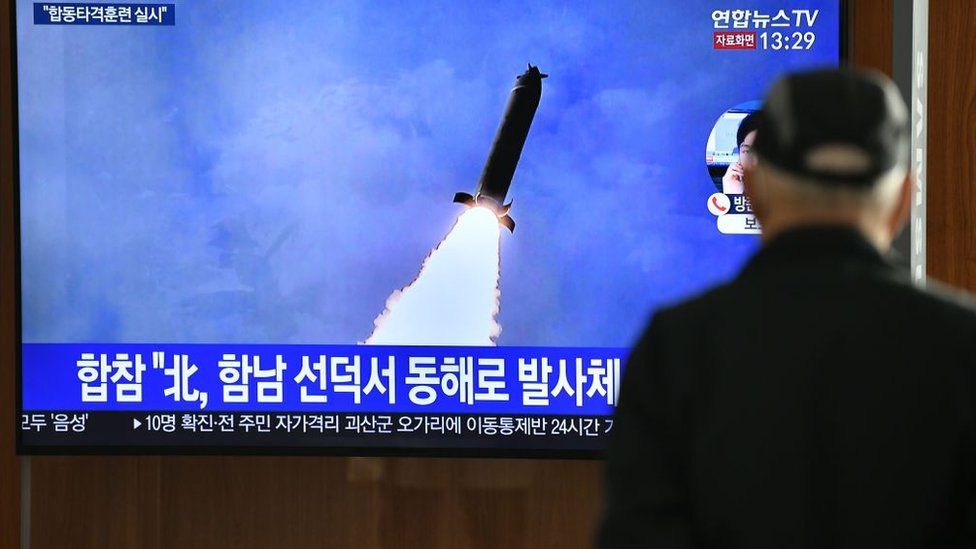 "Some crazy leader may decide to fire nuclear weapons at Japan. Or they could use them for political intimidation. Japan is quite vulnerable to intimidation. We have to do more in defence terms."

Japan's pacifism was foisted on it by the American occupiers after World War II. Junking this has always seemed far-fetched. But it's something both the US government, and much of Japan's political elite now support.

"Many Americans wish they hadn't bound Japan with the peace constitution," says Richard McGregor of the Lowy Institute.

"We shouldn't forget that people like Abe also deeply resent the Americans imposing this constitution on them. They obviously bottled up their annoyance because they want the alliance with America.

"They know they can't handle China on their own. There is a kind of seller's remorse and buyer's remorse on the peace constitution on both sides of the Pacific."

In fact, Japan is already far from being a true pacifist state, whatever its constitution proclaims.

Its navy is now amongst the most powerful in the world - quite a bit larger than Britain's Royal Navy. What Japan lacks is long-range strike capability.

Prof Yoichi Shimada says the consensus is that must now change. "The position that Japan should have weapons which can hit the enemy territory, I think that in the ruling Liberal Democratic Party the vast majority of the politicians thinks it's necessary for Japan to have such capability." 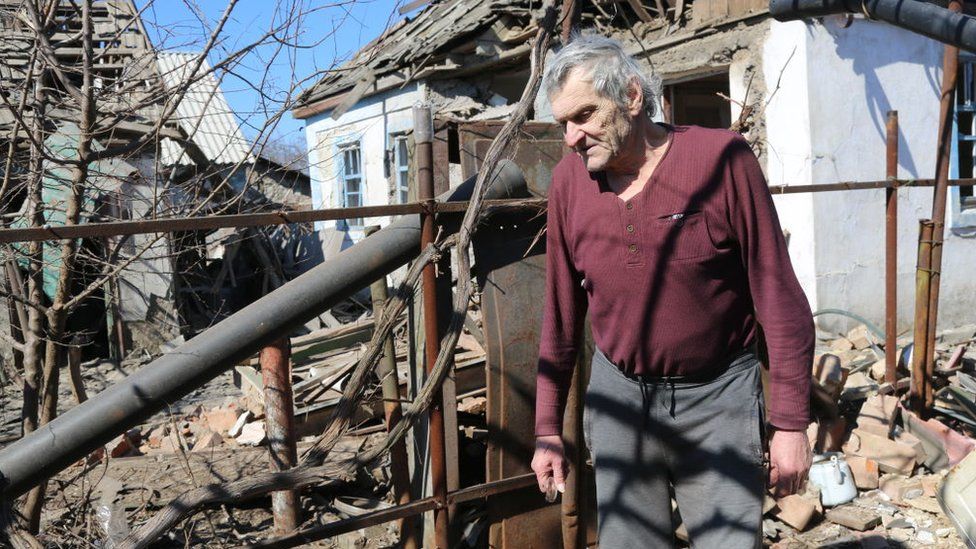 Prof Shimada says Vladimir Putin's threats against Ukraine have only made that more urgent.

"President Putin actually referred to the use of nuclear weapons against a non-nuclear state. That amounts to a game changer for many politicians in Japan.

"Russia is one of the permanent members of the Security Council of the United Nations. We all know that Putin is brutal. But it is very shocking, even for him."

Unlike Ukraine, Japan has a full alliance with the United States, and a commitment from Washington to retaliate against any country that attacks Japan, including with nuclear weapons.

That has worked while America has reigned supreme. But in Asia, China is now rapidly approaching military parity with America. And then came the election of Donald Trump.

"Mr Trump said that you have to do your own security," says Hiromi Murakami, author of The Abe Legacy. "He said it explicitly. But I think the overall trend of US is basically the same as Mr Trump. You can't totally rely on the US anymore."

For some, like Ambassador Kato, the answer is to strengthen the US-Japan alliance - and for Japan to take on more of the burden of defending its own neighbourhood.

For Prof Shimada it could mean one day Japan will have to develop its own nuclear deterrent.

One thing everyone I spoke to agreed is that Japan must somehow get over the taboo of talking about its own defence.

"This has been avoided for many, many years." says Ms Murakami.

"But the Japanese leadership really needs to bring this to the table and show it to the public. We can't live in this fake world any longer.

"This Ukraine situation is really shocking, and I hope that it will trigger the leadership and the general public to really think."

they can kill the body but not the soul

they should not make this Ukraine war worst. why should they go nuc?

Maybe they might ,but we pray for no more war