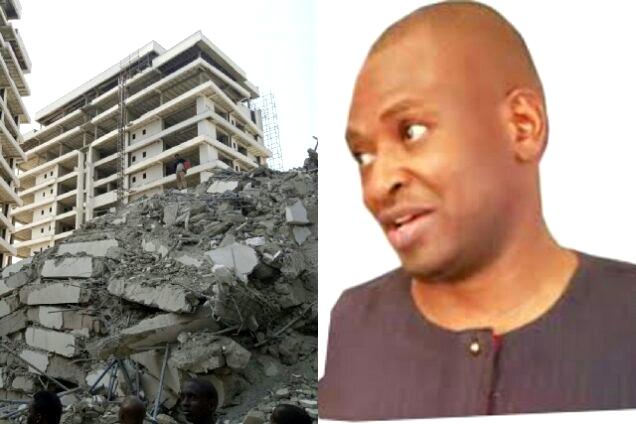 Mr. Olufemi Osibona(Femi Fourscore) is at the centre of the tragic story of the Gerrard Road, Ikoyi, Lagos 21-storey building which went down around noon last Monday, killing dozens. Femi story, as told by himself, is one of grass to grace, and full of ambition, guts, trying to do what has never been done before in Nigeria.

By putting up the edifice, and two others in the same location, the Founder/CEO of Fourscore Homes Limited wanted to create a seven-star hotel in a residential environment which has now ended in a tragedy of monumental proportion. Before then he was said to be the first African to put up a 7-storey building in the UK. Femi told his moving story during a TVC programme. Excerpts:

All glory must be given to God Almighty. After my graduation from a university in England in 1991, I went into buying and selling of shoes. That was what I was doing from 1991 to 1997. In 1996, I decided to buy a house and rent out.

Thereafter, I decided to go into real estate development because I was tired of moving around in my mobile shop. At that point, I was making money. A lot of people know me in England. I would buy the shoes from Italy, bring them to London. I understood the secret of selling. Nigerians like shoes; they buy shoes not because they need them but if Nigerians see good things they will buy. I have people that I usually targeted: Rich men that keep their word.

Then I went to the person who introduced her to me and she asked me “why do you want to sell the land? Don’t you know you can build?” I asked her what she meant and she said “I mean you should build on the land instead of selling it”. This was very strange to me and I wondered where to start from. And she said “call the local authority”. We called an architect who then called the local authority and we had a meeting there. I was surprised when they said we could develop two units. I was surprised, “is it that easy?” That was how I started. I developed two units there; a two-bedroom and a three-bedroom apartment. Surprisingly, we developed it from the rent I was collecting on the main building. It was very strange to me but I saw it happening. When we completed it in 1998, it was sold; then I bought somewhere else.

It was a big house; we converted it into three flats. I applied for a two-storey extension. Upon approval, they mistakenly wrote three-storey instead of two. When we started developing it…you know, you can’t have a three-storey building in an area where every other building is two-storey. They reported me to the Council whose officials came and realized their mistake, they said I should not do a three-storey but I went ahead and did. They took me to their Committee and I won. That was how we did the three-storey. It was like the price of land was down when I bought the property, I can’t forget it.

A life of a goal chiever started with a strong mind

wow u should be careful

The story is over

Ckk I jj it ckcijx