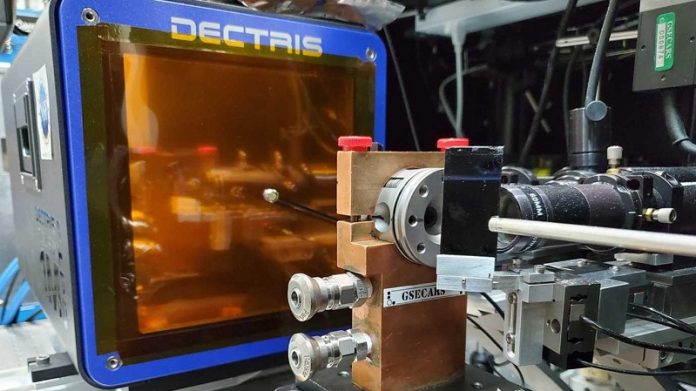 Scientists used diamonds and a beam of brilliant X-rays to recreate the conditions deep inside planets, and found a new phase of water called “superionic ice.”

Everyone knows about ice, liquid and vapor—but, depending on the conditions, water can actually form more than a dozen different structures.

Scientists have now added a new phase to the list: superionic ice.

This type of ice forms at extremely high temperatures and pressures, such as those deep inside planets like Neptune and Uranus.

Previously, superionic ice had only been glimpsed in a brief instant as scientists sent a shockwave through a droplet of water, but in a new study published in Nature Physics, scientists found a way to reliably create, sustain, and examine the ice.

“It was a surprise—everyone thought this phase wouldn’t appear until you are at much higher pressures than where we first find it,” said study co-author Vitali Prakapenka, a University of Chicago research professor and beamline scientist at the Advanced Photon Source at Argonne National Laboratory.

“But we were able to very accurately map the properties of this new ice, which constitutes a new phase of matter, thanks to several powerful tools.”

Even as humans have peered back in time to the beginning of the universe—and down to the smallest particles that make up all matter—we still don’t understand exactly what lurks deep inside the Earth, let alone inside the sibling planets in our solar system.

Scientists have only dug about seven and a half miles beneath Earth’s surface before the equipment started to melt due to the extreme heat and pressure.

Under those conditions, rock behaves more like plastic, and the structures of even basic molecules like water start to shift.

Since we can’t reach these places physically, scientists must turn to the laboratory to recreate conditions of extreme heat and pressure.

Prakapenka and his colleagues use the Advanced Photon Source, a massive accelerator at Argonne National Laboratory that drives electrons to extremely high speeds close to the speed of light to generate brilliant beams of X-rays.

They squeeze their samples between two pieces of diamond—the hardest substance on Earth—to simulate the intense pressures, and then shoot lasers through the diamonds to heat the sample up.

Finally, they send a beam of X-rays through the sample, and piece together the arrangement of the atoms inside based on how the X-rays scatter off the sample.

When they first ran the experiments, Prakapenka saw readings of the structure that were much different than he was expecting. He thought something had gone wrong, and there had been an unwanted chemical reaction, which often happens with water in such experiments.

“But when I turned off the laser and the sample returned to room temperature, the ice went back to its original state,” he said. “That means it was a reversible, structural change, not a chemical reaction.”

Looking at the structure of the ice, the team realized it had a new phase on its hands. They were able to precisely map its structure and properties.

“Imagine a cube, a lattice with oxygen atoms at the corners connected by hydrogen,” Prakapenka said. “When it transforms into this new superionic phase, the lattice expands, allowing the hydrogen atoms to migrate around while the oxygen atoms remain steady in their positions.

It’s kind of like a solid oxygen lattice sitting in an ocean of floating hydrogen atoms.”

This has consequences for how the ice behaves: It becomes less dense, but significantly darker because it interacts differently with light.

But the full range of the chemical and physical properties of superionic ice have yet to be explored. “It’s a new state of matter, so it basically acts as a new material, and it may be different from what we thought,” Prakapenka said.

The findings were also a surprise, because while theoretical scientists had predicted this phase, most models thought it would not appear until the water was compressed to more than 50 gigapascals of pressure (about the same as the conditions inside rocket fuel as it detonates for lift-off).

But these experiments were only at 20 gigapascals. “Sometimes you are handed surprises like this,” Prakapenka said.

But mapping the exact conditions where different phases of ice occur is important for, among other things, understanding planet formation and even where to look for life on other planets.

Scientists think similar conditions exist at the interiors of Neptune and Uranus, and other cold, rocky planets like them elsewhere in the universe.

The properties of these ices play a role in a planet’s magnetic fields, which have a huge impact on its ability to host life: Earth’s powerful magnetic fields protect us from harmful incoming radiation and cosmic rays, whereas the surfaces of barren planets Mars and Mercury are exposed.

Knowing the conditions that affect magnetic field formation can guide scientists as they search for stars and planets in other solar systems that might host life.

Prakapenka said there are many more angles to explore, such as conductivity, viscosity and chemical stability, which change when the water mixes with salts or other minerals, the way it often does deep

beneath the Earth’s surface.