Dozens of people have been killed and more than 50 wounded after multiple bomb blasts hit a mosque in southern Afghanistan today.

Three explosions rocked the Fatemieh mosque in Kandahar, the largest Shiite place of worship in the city, during Friday prayers - with witnesses saying one blast hit the main entrance and another hit an area where worshippers wash themselves.

At least 32 people have been killed and 53 wounded, according to early official tolls, though local sources warned that it likely to rise.

No group has yet claimed responsibility, but it comes a week after an ISIS-K bomb attack on Shiite worshippers in the northern city of Kunduz killed more than 100. 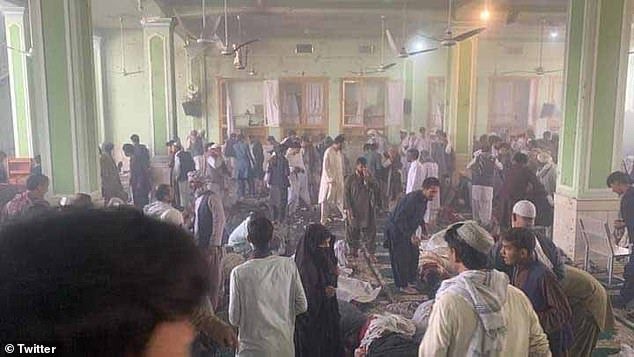 ISIS-K is the terror group's Afghanistan branch and has stepped up attacks in Afghanistan since the Taliban retook control in August.

The latest attack is significant because it took place in Kandahar, the ancestral homeland of the Taliban.

Many Afghans backed the Taliban retaking control of the country because they believed the Islamist group could bring security and stability.

Shiite Muslims are frequent targets of ISIS, whose followers are Sunni and view the former sect as effectively traitors to the faith.

According to an AFP journalist the mosque was full of people at the time of the explosions, and at least 15 ambulances went to the scene.

Graphic images posted to social media, which could not be immediately verified, showed bodies lying on the floor of the Fatemieh mosque. Witnesses said one bomb exploded near the entrance to the mosque, while another exploded in an area where people wash themselves

ISIS-K has links to the Taliban through the Haqqani Network - a mercenary force run by the Haqqani family, whose members form part of the new Afghan government.

But the two groups are ideologically opposed and have been at war with each-other since 2015, when ISIS-K was established in Afghanistan.

Formed at the height of ISIS's so-called Caliphate across Iraq and Syria, ISIS-K was intended to extend the group's reach into Afghanistan.

It poached fighters from Taliban ranks who believed the group was not extreme enough, causing a rift between the group's leaders.

Mullah Akhtar Mohammad Mansour, a senior Taliban figure, then wrote a missive to ISIS spiritual leader Abu Bakr al-Baghdadi suggesting that any expansion of the ISIS caliphate into Afghanistan should happen only under the Taliban banner.

This caused fighting to break out between the two groups, which continued until 2019 when a series of defeats effectively stopped ISIS-K fighting traditional battles.

When signing an Afghan peace deal with Donald Trump in Doha in 2020, the Taliban pledged to keep terror groups including ISIS-K out of Afghanistan.

We are saddened to learn that an explosion took place in a mosque of the Shiite brotherhood in the first district of Kandahar city in which a number of our compatriots were martyred and wounded.

'Special forces of the Islamic Emirate have arrived in the area to determine the nature of the incident and bring the perpetrators to justice.

This is not fear 😱