An HR Professional took to Linkedln to share a personal letter her security man wrote to her as he quit the job.

A female boss shared the letter she received from a male security officer who quit his job to further his education.

This is one amazing appreciation letter that every boss would love to receive.

HR Professional identified as Felicia Opoku-Folitse took to Linkedln to percentage a non-public letter her protection guy wrote to her as he give up the task.

According to her, the security man exceeded her the private letter on Monday, February 22 simply as she resumed for the day’s work.

The guy had gotten admission into the Institute of Accountancy education in Accra, Ghana and to bid his girl boss farewell, he wrote her a private letter.

Sharing a image of the letter, Felicia wrote;

”Well, I’m a chunk emotional and crushed this morning through a private letter I received from an outsourced Security Guard who generally is stationed in our Admin block throughout the day and felt like sharing. This is a person who isn’t even an immediate staff….

When I entered the block this morning, I gave him my standard greeting and smiled as properly

Then he speedy observed me and stated “ Madam I have a letter for you”. I requested who requested him to supply it to me and he said it turned into from him to me.

I turned into eager to read the letter so after I entered my office, I placed my bag down and quickly opened the letter to examine it’s content material. Reading the letter made me emotional and I right away sat down and commenced to reflect on plenty of things.

One issue that stored resonating is to treat people with recognize regardless of their position/rank in lifestyles. Be first-class to humans and smile continually because it price not anything.

Be best to humans and spread happiness

Have a blessed week ahead !”

Read the touching letter below; 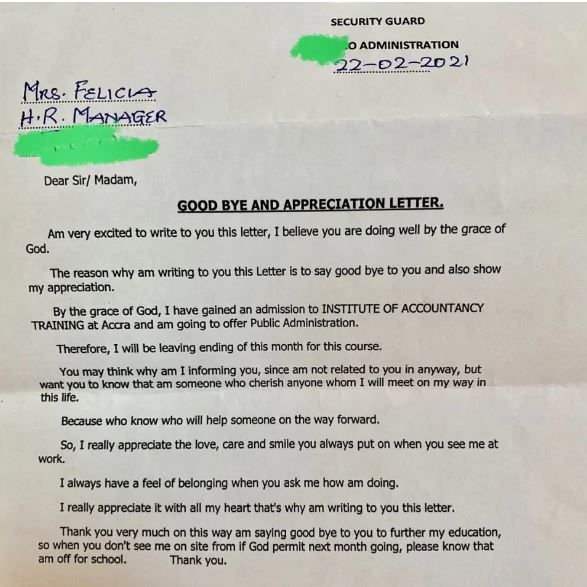 There was really a lot going on behind

This is a great lesson for all

education is the key to success

Nice one  good and faithful savent

Is he in love?

I think he's in love

I no fit oo