The White House is worried an impeachment trial will distract from President Biden’s agenda, but in reality, it has reminded people of “the daily fever pitch” they left behind. 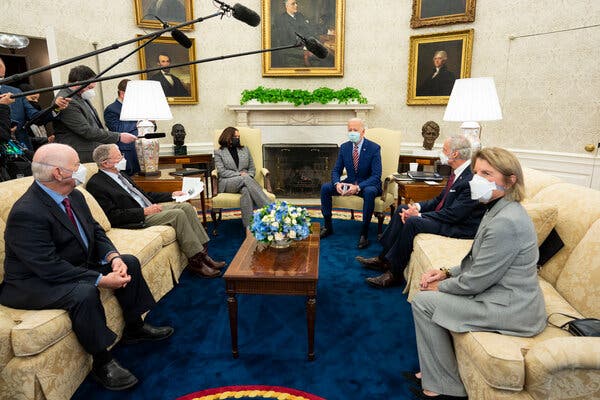 “I’m focused on my job,” President Biden told reporters during a meeting on Thursday with a bipartisan group of senators in the Oval Office.Credit...Doug Mills/The New York Times

WASHINGTON — For weeks, President Biden and his aides have tried to frame the second impeachment of his predecessor, Donald J. Trump, as a distraction from his efforts to fulfill the promises he made to the American people.

“I’m focused on my job,” the president told reporters on Thursday, “to deal with the promises I made. And we all know we have to move on.”

That focus, he said, meant that he had not watched the gruesome retelling of events on Jan. 6 that the Democratic House impeachment managers had shown in a series of stunning video clips on Wednesday because he had been “going straight through last night, until a little after 9.”

Mr. Biden did concede that “my guess is some minds may be changed” as a result of the trial. But his press secretary, Jen Psaki, said later that “he was not intending to give a projection or prediction.”

Despite the emotional and harrowing scenes that Democratic lawmakers hope will define Mr. Trump’s legacy, even if he is not convicted, White House officials have refused to engage in anything even tangentially related to the trial and have insisted they spend no time thinking or talking about the former president who relentlessly attacked Mr. Biden.

Worried that impeachment would distract from the Biden agenda and further divide the country, Ms. Psaki has painstakingly avoided even yes-or-no questions about whether the president believes the trial is constitutional. “We’re not going to weigh in on every question about the impeachment trial, and we don’t feel it’s necessary or our role to do that,” she said when pressed this week.

Democrats do not all share the concerns, and neither do many Republicans.

“It reminds people of why they so definitively wanted to turn the page on Donald Trump’s daily fever pitch versus the calm, cool, controlled Joe Biden at 97.1 degrees,” said Rahm Emanuel, a White House chief of staff under President Barack Obama and a former mayor of Chicago.

Mike DuHaime, a Republican strategist, put it another way. “The longer Donald Trump stays central to the news, the better it is for Biden,” he said. “The constant reminder of Trump’s worst actions makes Biden look great by comparison, simply by acting sane.”

But on Thursday, as House Democrats used the words of the rioters who stormed the Capitol to continue to build their case against Mr. Trump, Mr. Biden spoke with urgency about the United States’ competition with China.

“We don’t get moving, they’re going to eat our lunch,” he said, before paying a visit to the National Institutes of Health, framing his day with his two most pressing concerns, the economy and the coronavirus.

And exhibiting a level of top-down message discipline that was rarely on display during the Trump presidency, Ms. Psaki has worked to reinforce the message that the president’s thoughts are not on the behavior of his predecessor and its consequences. “His view is that his role is — should be — currently focused on addressing the needs of the American people, putting people back to work, addressing the pandemic.”

Some Democrats in Congress, like Representative Kurt Schrader of Oregon, have taken a similar stance. Mr. Schrader said he feared breathing “life into the corpse of this president” and turning Mr. Trump into a “martyr” for his supporters by pursuing an impeachment trial against him and keeping him front and center in the news.

But the trial has instead provided Mr. Biden with some cover as he faced hurdles on some of his defining policy promises. 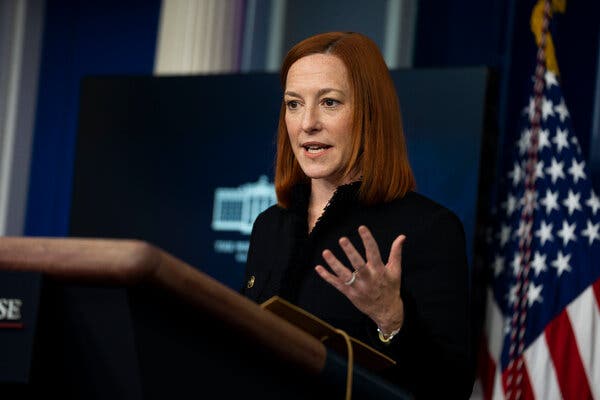 On Tuesday, as Representative Jamie Raskin of Maryland, the lead impeachment manager, made an emotional appeal to senators, the White House backtracked on its stated goal of reopening “a majority of our schools” in the first 100 days of Mr. Biden’s presidency.

Mr. Trump’s trial dominated headlines instead of Ms. Psaki’s scaling back the president’s ambitions, saying the goal was for more than 50 percent of schools to have “some teaching” in person “at least one day a week” in the first 100 days.

In an email, Ms. Psaki disputed the fact that her comments signified a retraction of previous promises. “We gave our first definition of the specifics of a goal that had not yet been clearly defined for the public,” she said.

But Mr. DuHaime said an added value of Mr. Trump’s presence was that it “distracts attention from any controversial policy or personnel moves Biden is making during his first 100 days.”

To wit, the confirmation hearing for Neera Tanden, Mr. Biden’s nominee to lead the Office of Management and Budget and one of his more contentious appointments, drew little attention. And the questions Republican senators put to Ms. Tanden were more often about her own incendiary Twitter posts than about the $1.9 trillion stimulus package that Mr. Biden has proposed.

Some of Mr. Biden’s policies are generating some pushback from within his own party. Senator Joe Manchin III of West Virginia, for instance, has urged Mr. Biden to reconsider his decision to rescind a presidential permit for the Keystone XL oil pipeline.

Former Representative Charlie Dent, Republican of Pennsylvania, said that the pipeline decision was one of several for which Mr. Biden might be facing more extensive criticism were it not for the impeachment trial.

“As long as we’re talking about Trump and impeachment, that means that we’re not talking about any small stumbles or missteps of the Biden administration,” Mr. Dent said.

Mr. Trump served as a powerful uniting force for Democrats throughout the 2020 campaign. His suspension from Twitter has prohibited him from sideline commentary criticizing and undermining the legitimacy of Mr. Biden’s presidency. But it has also deprived Mr. Biden of that common enemy that has helped him unite the party.

With Mr. Trump uncharacteristically quiet, Democrats have over the past few weeks zeroed in onRepresentative Marjorie Taylor Greene, a freshman Republican from Georgia, as a substitute, highlighting her extreme views and her willingness to spread falsehoods and conspiracy theories.

The trial, for at least a week, brought the worst consequences of Mr. Trump’s language back into the public eye in a way, and served as a reminder of the change many Americans sought during the presidential election in November.

“Impeaching Trump was appropriate and necessary and so far none of the fears of it being an unhelpful distraction, or backfiring politically have materialized,” said Brian Fallon, a Democratic strategist. “It is reminding the public how much of a relief it is to have Trump gone and showing the extremeness of Republicans who are still standing with him.”

They should allow Joe biden na

Why not discuss it

Lets see what will he do